The origins of Milwaukee's famous 'Domes' stretch back over 120 years - get to the know the history of the Mitchell Park horticultural conservatory. Mitchell Park was one of the first five parks created as part of the Milwaukee Parks Commission, which formed in 1890. Work soon began on transforming Mitchell Park into a horticultural destination, with plantings of tulip gardens and willow trees and the construction of a lily pond and boating lake. Work on a glass conservatory, inspired by London's famous Crystal Palace, began in 1898. The 9,101 square foot building was designed by Milwaukee architects H C Koch & Company, and cost $24,473 to construct. The building included a center pavilion with an east and west wing. The conservatory opened to the public in 1899 and a few years later a sunken garden with formal flower beds was also created.

"The citizens of Milwaukee can be proud of this magnificent building. During the fall the chrysanthemum show was attended by thousands of people, and during the winter months the conservatory was well patronized by the public, all of whom expressed their entire satisfaction over the splendor of the exhibits, consisting of different varieties of palms, ferns, flowers and herbaceous plants." - 1899 Parks Commission Report. Color Postcard of the Gardens Spanish moss hanging from the roof

Inside the conservatory visitors could explore year-round collections of palms and orchids as well as seasonal flower shows.

"The event of the season was the midsummer night festival, when the formal garden and fountains were illuminated by thousands of Chinese lanterns, and visitors had the pleasure of viewing the work of the season and listening to the beautiful music of Bach's orchestra" - 1904 Parks Commission Report. The conservatory remained a popular attraction for decades, however, as visitor numbers to the conservatory began to decline in the 1940s and 1950s, the decision was made to demolish the aging building and replace it with a modern facility.

In 1955 a design competition was launched for a new design for the conservatory. Milwaukee architect, Donald L. Grieb, won the competition with his beehive-shaped conoidal glass domes. Construction began in 1959 and lasted until 1967. The total cost of the project was $4.5 million. 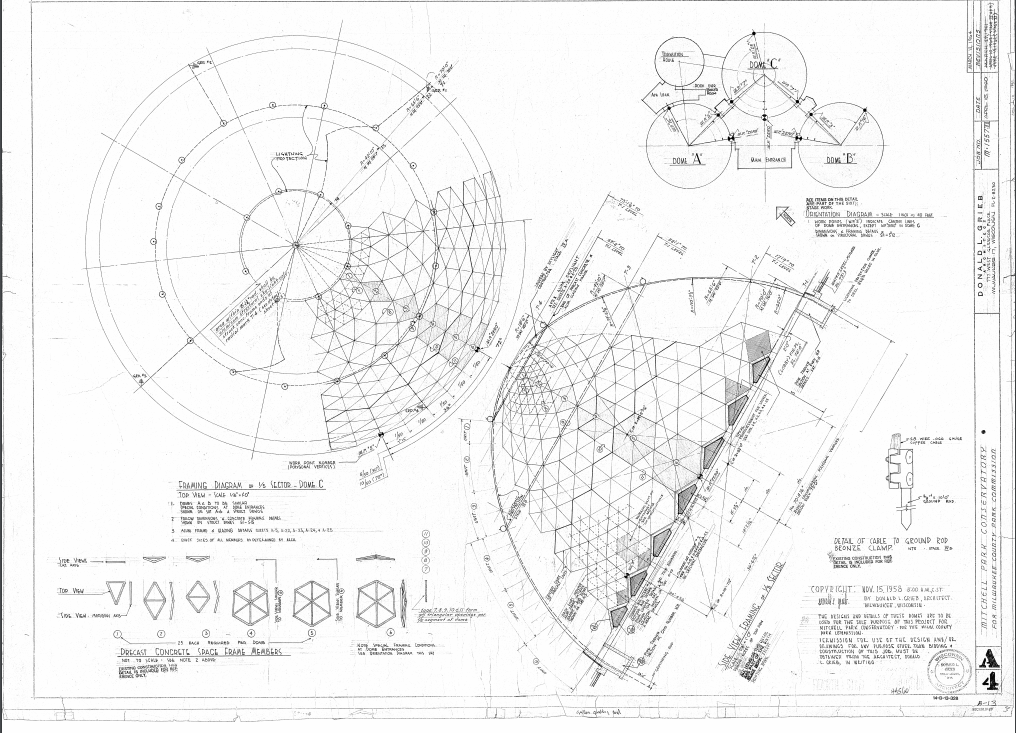 In 2013 a new series of propagation greenhouses were constructed next to the Domes. Six of the greenhouses are used to grow plants for display in the Domes, and the seventh, known as G7, is an event space used for weddings, catered events and other special events. The Domes feature permanent collections in the Tropical and Desert Domes, which a handful of the original plants from the 60's still on display. The Floral Show dome display changes five times a year.